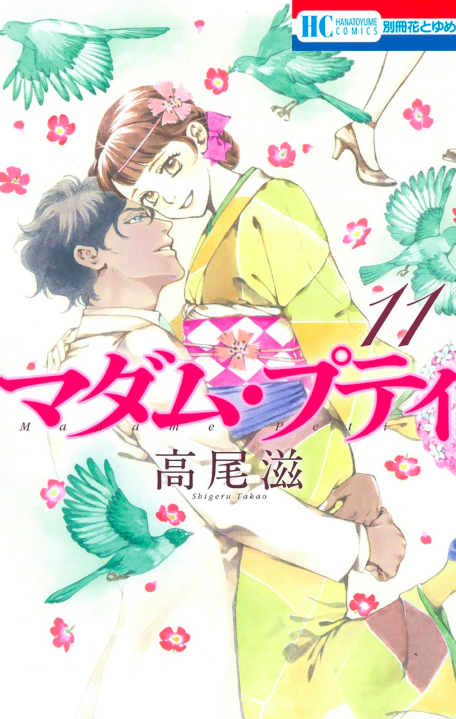 On the bed, Mariko hides her face to tell Niram that she is returning to France in 10 days with Fukiko. Mariko sobs behind her pillow asking Niram to embrace her until morning. Niram is surprised. He wants to see her face. Mariko cries and blushes. Niram pats her head and kisses her forehead and lips. He says that he won’t let her go. Niram kisses Mariko’s neck and starts to undress her. “Mariko/Niram you are warm. It’s like the wind blowing from a far place, like the water flowing from a far place. Sometimes, you are an ocean. It’s endless.”

Nidi asks Bharat what happens to His Highness since they haven’t seen him these few days. Bharat replies that he also has a human heart.

While holding a sleeping Mariko, Niram notices a servant bringing their meals. Niram asks about the noise outside and is told that they are cutting old trees in the courtyard. The servant suggests to float flowers in the tube for Mariko.

Mariko wakes up to find lots and lots of flowers on her bed. Niram rests his head on the bed while sitting on the floor. Mariko notices the couple bracelets that Niram and she are wearing. Niram wakes up, holding Mariko’s hand and asks if she still need that old ring. Mariko cries and jumps to Niram’s embrace.

On a sailing ship, Fukiko runs in to give Mariko news about the engagement of Princely State’s new King since he appears with the national treasure on his arm at the university opening ceremony. The bracelet is a pair and one is usually given to his fiancée. Mariko runs to see the land, crying and screaming, “Niram”.

“Time doesn’t stop. It just flies by.” It’s Spring 1940 in Pennsylvania, USA. Mariko reads news about Allied Troops. She comes home to deliver newspaper for Edward, who is napping on a rocking chair. Few years after Mariko left India, she got the permission from her mother and Edward became her guardian. She attended university in England, but by the time she graduated, England was already putting its foot into the war. Since Edward retired, she decided to come with him to the USA. Because of international situation, it became difficult to receive letters from other countries.
Mariko receives a letter from Vadodara Royal Family and is excited. While opening the letter, she meets with a cocky neighbor, who wants her to be his housekeeper. Mariko retorts that if he wants to get spoiled, beg his mama. She walks away from him. The neighbor is about to fight back but is stopped by someone.
Edward is sorry that he fell asleep. He asks if Mariko is going to read Niram’s letter. Edward tells Mariko that it’s ok to run if she wants to. Mariko replies that she will if he calls her. Edward is surprised that Mariko is obedient and no longer a tomboy. Mariko says that she is an adult and wonders if she can still run. Mariko still remembers the adventure as if it was yesterday. It’s still there but it feels like she is the only person who jumped away from that place. Even if she reaches her hand, she can’t touch those stars anymore.
Edward guesses the war will become bigger and spread throughout the world. England is asking their ally, India, to move the army. However, the Viceroy of Indian is asking the Princely States’ Kings to refrain from sending their men to dangerous high-risk battlefields. Mariko thinks Niram is not going to stay still when his men gets dragged to the battlefields. Edward says that he also receives a letter that Niram is a part of the Border Guard, who got assigned to dangerous area which might turn into a battlefield. Mariko notices someone’s footsteps and turns around. Edward pushes Mariko to run toward that person. It’s Niram. Mariko cries and runs to Niram, who still wears his bracelet.

Rama looks up at the plane in the sky and wonder if Uncle Niram’s plane has arrived at the border. Mina reminds her son that it’s a dangerous mission. She adds, “Your Majesty, you has ascend the throne. We need you to protect our Princely State.” Padma kindly looks at his son and says that he still needs their support. Gautam gives the profiles of the university students that are graduating this year, who will be working at the palace soon. However, there is an issue with one gentleman, who used to be a ‘dalit’, but Niram recommended him.

Niram complains that he came to get Mariko, but he never said to follow him to the post. Mariko retorts that Niram also cried out loud about how he can’t take it anymore and need her 24/7. Mariko apologizes and says that she wants to be with him. They hug while remembering people that they had met. “And their journey continues.”

That’s it y’all!!!! Thank you so much for reading.

I know I was MIA these past months, but I’m back to deliver the last chapter. So sorry for keeping y’all hanging. I wanted to complete this manga before I went on break, but things happened.

The beginning of the chapter is so romantic!!! I don’t mind the time skip (how many years anyway?), but what’s happen to Niram’s handsome face and hair? He looks really weird. Even though it’s a happy ending, it feels so rushed. Maybe I just want more?!

Anyway, that is it for this manga! I don’t see any extra chapter anywhere.
Please look forward to the next manga’s summaries~

I translate alone, so it really helps to give me some credits.
Please ask for permission before using my translation.

Thank you for reading my blog!!!